The EIGHT (8) years that Barack Obama was president of the United States was–relatively speaking–a long time. With media coverage that jumps from one breaking news story to the next, it’s easy, or perhaps inevitable that we, the people, forget some of the milestones that made this presidency arguably, one of the most consequential in American history. This unique volume attempts to capture them all!

pre-empt: to prevent an anticipated occurrence or
to take action before another person is able to; to preclude, to forestall

When it comes to historical accounts, more often than not, what passes as history is usually a “RE-Write” crafted by those in power with their own agenda and biases. Well, we the people have an agenda, too. Our agenda is fairness when it comes to telling this story. A “WE-Write” is simply history written by we the people.
In January of 2016, Barack Hussein Obama, ended his historic two-terms in office as 44th president of the United States of America.
Now, it would be great if Americans lived in a society where such a trivial matter as the color of a man’s skin did not affect how he will be remembered, but unfortunately that
society does not yet exist.
If you’ve lived in or simply observed life in America for any length of time, you’ve seen how it happens time and again. Genocide and slavery are sanitized for the textbooks. War criminals are pardoned and their crimes overlooked and forgotten by the media. Hollywood fictionalizes history and that fiction becomes real in the public’s collective mind and memory.
At the same time, particularly when it comes to cinematic portrayals of men and women of color, noble individuals of real historical consequence are recast as supporting characters in their own stories–playing second to the humanized white leads who become their saviors and redeemers. We are left with hollow caricatures of these great individuals.
We must not allow that to happen this time. Don’t allow pundits, politicians and producers
to determine how you and your children remember Obama’s presidency.

“The Obama Legacy We-Write
Project is a way for we the people–all of us–to take action to
prepare, present, promote and preserve this legacy and pre-empt the RE-Write of history that is likely to occur.”

The idea for the “We Write” is very straightforward: to document and present in a permanent way
the accomplishments of this president, and to give people
the information, facts, images and words to pre-empt the media’s, Hollywood’s
and the history textbook “re-writes” that are likely to occur over time.
Let’s create and direct this conversation. Let’s control the narrative. Can we? Yes, we can!
The EIGHT (8) years that Barack Obama was president of the United States was–relatively speaking–a long time. With media coverage that jumps from one breaking news story to the next, it’s easy, or perhaps inevitable that we, the people, forget some of the milestones that made this presidency arguably, one of the most consequential in American history. This unique volume attempts to capture them all!

It will help you remember:

• “The Ground Game” and era of Social Media campaigning

• Triumph over the “one-term obstructionists”

…with citations, photos and commentary and more, in an easy-to-read, bold,
color keepsake (paperback or hardcover) that will last for years!

“This is a well compiled retrospective of a historical presidency. Wonderful pictures. This is a refreshingly positive and optimistic book. The writer reminds us that despite the shortcomings and missteps of his administration President Obama accomplished more than most others.”–Claire, New York
*****
“I have received the Obama Legacy book and very happy indeed!
Great book and many thanks for the superb work documenting President Obama’s achievement! Will post a review [on Amazon] in due course.”–Kamau, Australia 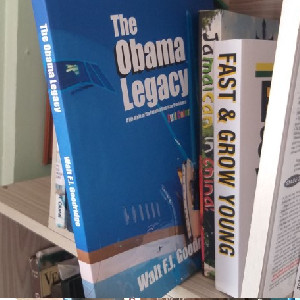 The Obama Legacy is a reminder of possibilities becoming reality. It serves as a reminder of that each time you look at its cover on your shelf.
View more at https://www.obamalegacybook.com