From Bugle Boy to Battleship

On Dec 7, 1941, Lloyd Glick was a naive 18-year-old watching a movie in downtown Berkeley CA theater, when they stopped the movie to announce Japan’s bombing of Pearl Harbor. Four months later, with his parents’ signed permission, he joined the US Navy. From Bugle Boy to Battleship is Lloyd’s fascinating account of his two years at sea in the Pacific Theater, as well as his return to visit the island of Saipan 70 years later.

Born in California on December 28th, 1923, Lloyd Glick was a naive 18-year-old boy watching a movie at a theater in downtown Berkeley on Dec 7 1941, when they stopped the movie to announce Japan’s bombing of Pearl Harbor.

A few days after the attack, Lloyd, already an accomplished trumpet player as 2nd Trumpet Chair for the University of California Symphony, took his desire to serve his country, his passion for music, and his dream of attending the prestigous US Naval School of Music, and showed up at the Navy recruiting office in San Francisco. Four months later, with his parents’ signed permission, he joined the United States Navy as a way of entering its Naval School music program. That decision would ultimately land him the position of Musician Second Class aboard the USS North Carolina as a member of the ship’s band while it participated in the bombings of Saipan, Guam, Palau, Pohnpei, and battles throughout World War II’s pivotal Pacific Campaign.

From Bugle Boy to Battleship is Lloyd’s fascinating account of his two years at sea, as well as his return to visit the island of Saipan 70 years later. From Bugle Boy to Battleship includes the actual emails that also tell the story of the unique relationship between Lloyd and his “tour guide” –an author living on Saipan–who became inspired by their correspondence to help Lloyd document his story for this and future generations. 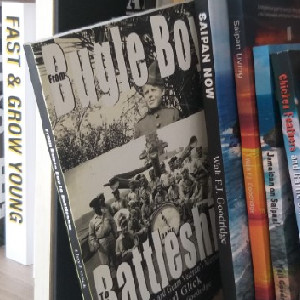 From Bugle Boy to Battleship will stand out on your shelf and serve as a visible, physical reminder of Lloyd's fascinating story, and the enjoyable and educational experience each time you glance at your shelf! And, it will be easier to share it with others!