The History We Write™ project started in the fall of 2016 as then President Barak Obama’s 2nd term as president of the United States was drawing to a close. Many realized that, within the context of US history, this had been a historic presidency that was deserving of a unique place and footnote in history. However, within many communities, there was also a palpable anticipatory concern that those who are often tasked with writing such history–in documentaries, textbooks, magazines–would not be sufficiently generous with what some consider one of the most of impactful US presidencies. A small group of like-minded individuals decided something needed to be done, and We the People was born.

The first official project under the HistoryWeWrite™ banner was the full color, table-top The Obama Legacy: A We-Write of the Greatest American Presidency. Several other projects preceded the launch but have since been added to the HistoryWeWrite™ brand. They all share the same goal. Whether it’s an account of life before, during and after the September 11,2001 terrorist attacks, or a challenge to the misinformation that often passes as conventional wisdom, or an over-sized chronicle of racism in the United States, the goal is to present an alternative perspective based on facts that are often purposely or inadvertently omitted from mainstream dialogue.

With that said, We the People present for your education and entertainment, the flagship product: The Obama Legacy: A We-Write of the Greatest American Presidency, available in Kindle, Paperback and Hardbound. Please do read more, view sample pages and considering ordering a few copies for friends and family at http://www.obamalegacybook.com 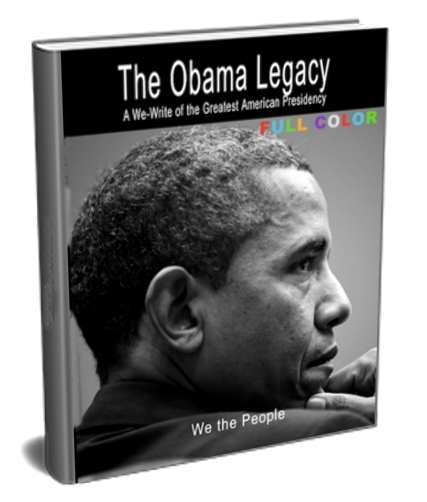 Also, please do join the Facebook group at https://www.facebook.com/obamalegacy

FREE: Receive this course in installments by email!